Skin In The Game

To Be Invested With Shared Risk And Reward

In business, competent action is required as well as shared risk and reward 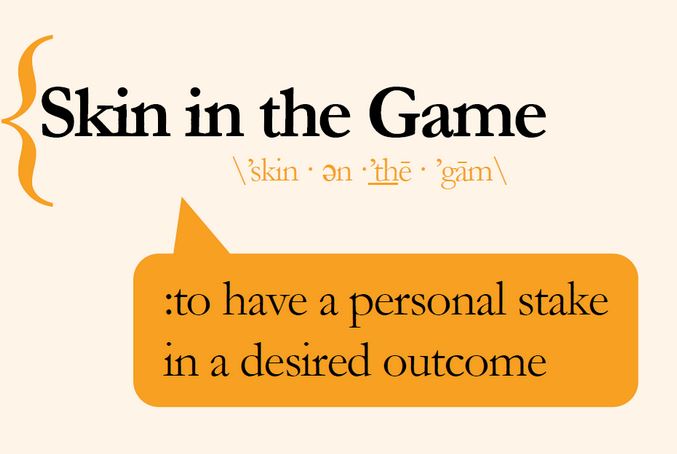 Skin In The Game - Overview

The phrase "skin in the game" has commonly been attributed to Warren Buffet, referring to his own investment in his initial fund. But Buffet has denied this reflecting that he simply popularised the phrase.

It is said that the origin of the phrase “to have skin in the game” comes from horse racing and describes the situation where the owner of a horse competing in a race is said to have “skin” in “the game”, meaning that the owner has a lot riding on the outcome of the event.

More recently the phrase has been popularised by former trader and now popular writer Nassim Taleb, who in his latest book Skin In The Game describes it as:

"...an assessment of asymmetries in human interactions, aimed at helping you understand where and how gaps in uncertainty, risk, knowledge, and fairness emerge, and how to close them."

As with all his books, Taleb has a lot to say, says a lot about it and then takes a long time to say it... but in essence it all boils down to this:

Only take advice from people who are already invested in the situation they are advising you about, and where they have something to lose if you fail as a result of following their advice.

Taleb also counsels us to pay careful attention to the asymmetries and the disconnects:

Taleb is known for his aphorisms and here are a few on this subject:

Skin In The Game In Business Relationships

Often in the world of business its not just about taking advice, its more often about making decisions about who to get involved with, who to invest your time and resources in, and who to trust.

Based on my own experiences of business I make the following observations:

[1] Just because someone looks the part doesn't mean they are...

[2] Just because someone you know and trust believes something to be true, does not make it so, it just means that they genuinely believe it to be true.

[3] Until you have clear and repeated evidence, and thus a good understanding, of someone's circle of competence watch the other guy's actions, pay close attention to the detail, specifically:

[4] You really cannot truly know someone’s strengths and weaknesses until you have been in action with them for an extended period of time.

[5] In a competitive world of "smoke and mirrors" always watch the other guy's feet to see his true intentions.


Return from "Skin In The Game" to: Mental Models