Regression To The Mean

Whenever correlation is imperfect, and thus causation is unproven, over time the best score will get worse and the worst will get better 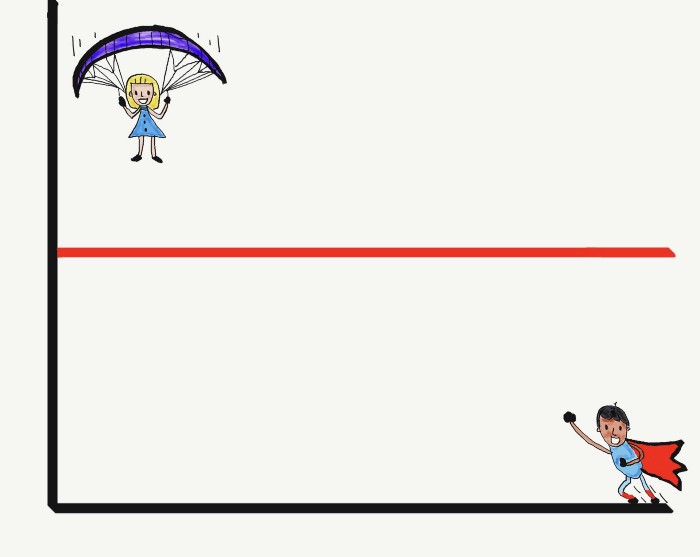 Regression to the mean shows that following an extreme random event, the next random event is likely to be less extreme.

The concept was first presented by Sir Francis Galton and the more comprehensive statement of regression to the mean is that:

In any series of events with complex phenomena that are dependent on many variables, and where chance is involved, extreme outcomes tend to be followed by more moderate ones.

It is not a mathematical law but a statistical tendency.

The strength or weakness of the correlation of shared factors [or causes] will show the level of dependency of the outcome [or score] on those factors.

If the correlation is strong there will be little to no regression to the mean, whereas as a weak or non-existent correlation between shared factors will likely show that there is a regression.

The only factor determining temperature – velocity of molecules — is shared by all scales, hence each degree in Celsius will have exactly one corresponding value in Fahrenheit.

So the temperature in Celsius and Fahrenheit will have a correlation coefficient of 1 and a plotting of temperature score will be a straight line.

If we looked at all countries in the world and plotted death rates from air crashes per country, in any specific year , against per capita consumption of bottled water, the plotting of scores for each event would show no pattern at all. Thus the correlation coefficient is 0, i.e. there is no correlation.

We need to be especially careful of regression to the mean when we are trying to establish causality between two factors.

As we have already established:

# Causation can be defined as action A causes outcome B.

# Causation results from a perfect correlation between action A and outcome B.

This is something that many people, social media, the general media, and sometimes even trained scientists, fail to understand or recognise.

Regression To The Mean - Examples

Can you recall a wonderful evening out? The weather was fabulous, your table was great and restaurant was excellent, the food and wine were superb and you were with great people.

Then you tried to repeat the experience and somehow it wasn't as good and you were disappointed. Why was this?  It was because your perfect evening was due to a random series of chance events that all fell in place on the wonderful evening.

Whenever you try to repeat the perfect experience, chances are that at least one thing won't be perfect the next time.


Regression to the mean is prevalent in sport and can explain the “manager of the month curse” in football.

This award is usually won by managers who have had four or more wins in a row, often because of a combination of skill and luck.

When the luck runs out, the “curse” strikes.

Regression to the mean can be harmless, but it becomes a problem when it is misinterpreted:

"For example, imagine you ran a hospital and were told that hospital-acquired infections were five times higher than average last month. A colleague tells you they know the cause and it can solved by using more prophylactic antibiotics.

Now your hospital budget will be tighter because of the costs of using more antibiotics, and you’re contributing to serious problem of antibiotic resistance."

Countering The Dangers Of False Attribution Of Cause & Effect