Seeing What You Want To See

Selecting and acting upon information that confirms your existing beliefs 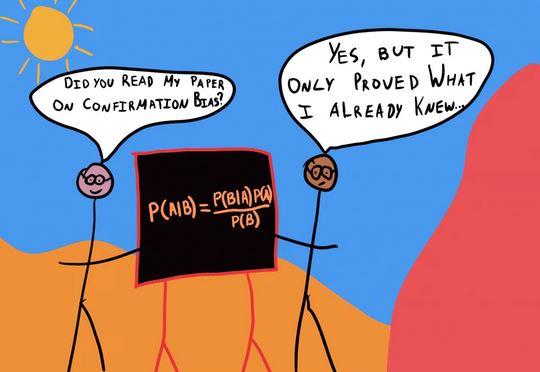 Confirmation bias occurs when you:

Confirmation bias tends to be stronger with emotionally charged issues and where you hold deeply entrenched beliefs.


Why does it happen?

Our brains use shortcuts, which are known as heuristics,

Confirmation bias is a heuristic used when you collect, analyse  and interpret information.

Because the process of evaluating evidence takes time and energy, your brain automatically looks for such shortcuts to speed up the process and make more efficient use of your mental resources.

It has been suggested by evolutionary scientists that our use of these shortcuts is based on survival instincts.

In the modern world this is less to do with survival and more to do with convenience. Processing and assessing information quickly, and formulating new explanations, hypothesis and beliefs takes time. You are therefore more likely to follow the patterns that the human brain has adapted over the last 100,000 years, largely out of necessity,  to take the path of least resistance, .

A further reason why you may exercise confirmation bias is to do with self esteem.

It can be very threatening to your identity and sense of self to discover that your deeply held views are disproved by the evidence you are assessing. To face evidence that a long held and deeply felt belief is inaccurate or false can be the motivating influence for use of this bias.

As a consequence of this you may look for information that supports rather than disproves your existing beliefs.

When you interact with other people whose views are known to you, you may have a tendency to adopt a similar position which the rest of the group, or the dominant members, can confirm and thus you fit into the group.

This is referred to as a  “confirmatory thought” which is said to involve “a one-sided attempt to rationalize a particular point of view.”

In a group setting, confirmatory thought can lead to “group-think,” which is where the desire for conformity in the group results in dysfunctional decision making.

The algorithms used by Facebook and other social media companies have a “filter bubble effect,” which is where the use of technology amplifies and facilitaes your tendency toward a confirmation bias.

Many other websites also use algorithms to predict and project the information a user may want to see.

Given that you may prefer content that confirms your beliefs, filter bubbles might exclude information that clashes with your existing opinions from your online experience.

Why does it matter?

At the personal level, confirmation bias affects your decision-making and reduces you to only focusing on evidence that confirms your assumptions, beliefs and prejudices, and this will likely result in sub-optimal results.

At the group level, a culture of "group-think" can hinder group decision making by contributing to the assumption that harmony and group coherence are the values most crucial to success.

Whilst this reduces disagreements within the group it also reduces the likelihood of reassessment and fresh thinking, it is also conducive to bad decisions.

How To Avoid Confirmation Bias


Confirmation bias is most likely to affect you when you are at the information gathering stage prior to making a decision.

Like most of the demons and gremlins that drive so much of our behaviour, and distort our judgement, confirmation bias occurs unconsciously.

This means that you are most likely unaware of its influence on your decision making thought processes.

As with most unconscious thought processes, if we knew we had them and could see them at work, we would not act upon them.

Therefore, it follows that the first step to avoiding confirmation bias is [a] being aware that it is a problem, and [b] understanding that it is unconscious.

As a personal illustration of this, when I am researching people and subjects for inclusion on this website, I will also search for the contra-view by using negative search phrases and/or searching for reviews and criticisms of the person or subject in view.

The best people to use for this are senior interim managers or similar third parties who have extensive experience of your sector.

Alternatively, seek the input and opinion of independent minded natural leaders who are in the frontline of your organisaion and who are part of the informal organisation - that is, they are not part of the official management structure.

Excellent and comprehensive article from Shane Parrish of Farnam St:

Confirmation Bias And the Power of Disconfirming Evidence

Earning The Right To Hold An Opinion

Any fool can sound off and reject a belief system or a differing perspective, but the minimum requirement for an authentic rejection is a basic comprehension of the strengths as well as the weaknesses of that which is being rejected.

Unless you have held a belief and have developed a considerable comprehension of it you are not in a position of sufficient knowledge to reject it.

Another excellent article from Shane Parrish of Farnham Street:

The Work Required To Hold An Opinion