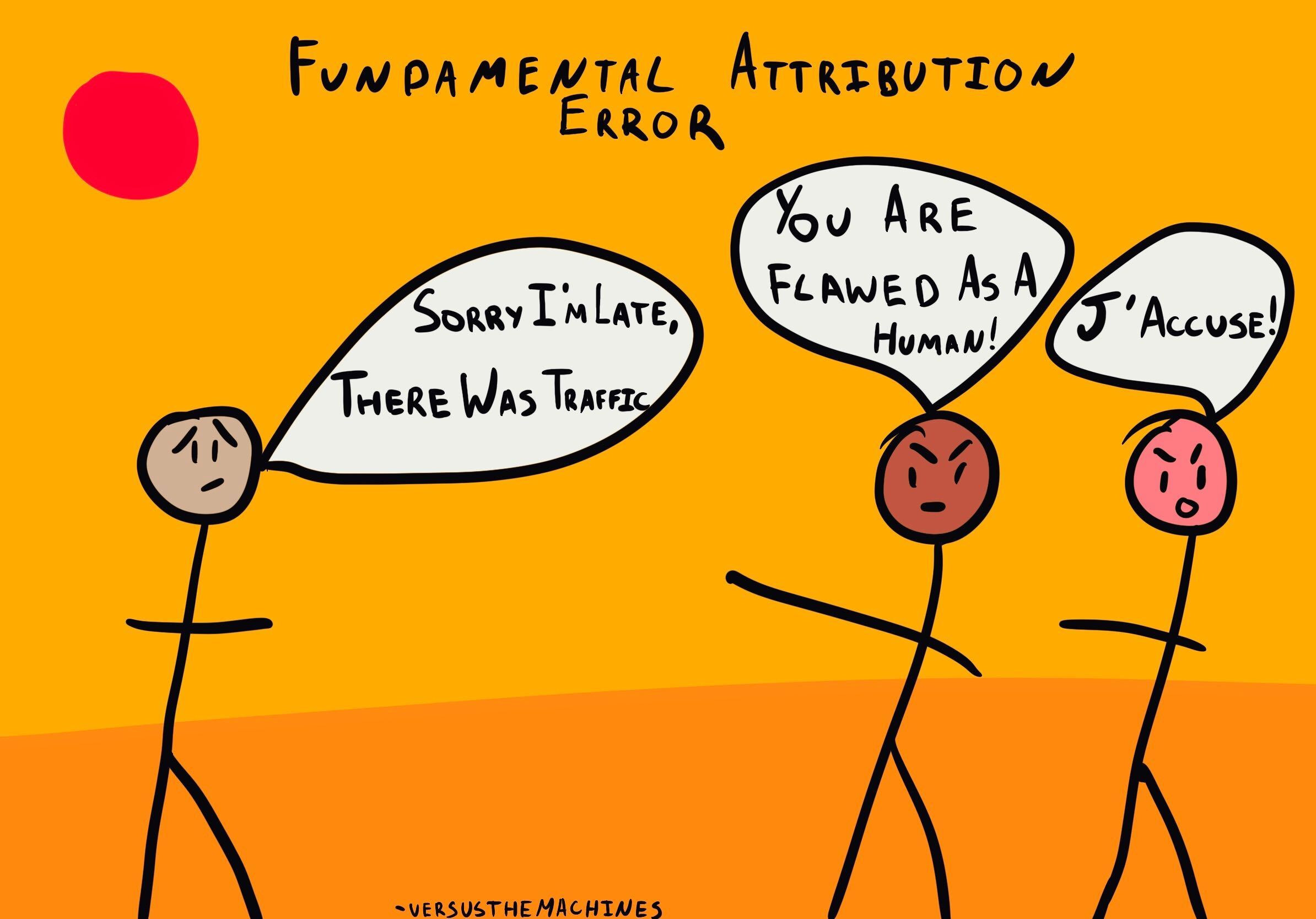 The fundamental attribution error is a cognitive bias that assumes that a person's actions depend on what "kind of person" someone is rather than on the social and environmental forces that may influence the person.

People who are influenced by this bias tend to regard other people as internally motivated and responsible for their behavior. So for example, they will tend to believe that other people do bad things because they are bad people. Situational factors that might have played a role are ignored.

An example of a fundamental attribution error [averted]

As a fairly typical UK citizen my knowledge of the sex trade in the UK was limited to what I read or saw in the media. I tended to think in terms of the "high-end" escort girls pandering to the wealthy elite and motivated by their very high earning potential or the other end of the spectrum, sad and broken women who were drug users living in poverty in the run-down areas of inner cities.

I recall when I first starting working in S.E.Asia being totally surprised at the number of "working girls" plying their trade in the night clubs, bars and hotels of Singapore and other cities in the region and and who appeared entirely "normal".

My friend who was inducting me into life as a new ex pat in S.E.Asia noted my surprise and advised me not to be too judgemental.

He said these women are not "whores", not "tarts" and not to be referred to as "prostitutes", he said "they are just ordinary women working to support their families back home in the Philippines or Vietnam" and he said: "we refer to them as working girls".

Fast forward a few months and I recall being at a bar in a restaurant in Kuala Lumpur and being approached by a pleasant looking Vietnamese woman aged about 30. She spoke very good English, and of course after a while offered her services, which I declined, but I did suggest that she join me for dinner, that I would pay her a fee for her time if she we would agree to talk with me - which she did.

What followed was a humbling and moving experience listening to this girl's story - despite a university education and some success running her own business  - a  story of financial hardship and setbacks. "I never saw myself as a working girl" she said, "I used to judge them... but now I am one..."

She then went onto to tell me how she navigated the necessary adjustments, the emotional and psychological realignment, to be able to sleep with a different man every night for money.

"How was it the first time?" I asked her. "I went home afterwards and wept for hours " she said, "the following night it was the same... then after 5 nights I got used to it and didn't feel a thing, I just thought of the money...now I am just numb to it..."

Fast forward 10 years and hers is a story that I have heard in variations a number of times in S.E.Asia. This not a tale of immorality or greed, just a story of survival, and an attempt to provide for a young family and aged parents back in a home country - usually Vietnam or the Philippines.

My attribution error was averted!


Character Can Not Always be Used to Predict Behaviour

Traditional folk psychology supports the notion that character is consistent.

It runs along the lines of simply figure out someone’s character and you’ll know how to predict or explain everything about them.

But as social and political theorist Jon Elster writes in his book "Explaining Social Behavior":

Fundamental Attribution Error - Why It Happens

So, why do we commit the Fundamental Attribution Error even when we should know situational factors might be at play?

[1] It takes too much mental effort

It takes effort to adjust your perception of somebody’s behaviour to be more in line with the situation they’re in. Given that we all have limited cognitive resources, and our brains like to take shortcuts - known as heuristics -  this makes makes us vulnerable to a range of cognitive biases.

The counter to this is to ask ourselves:

It is the third step that takes the effort!

Strange as it may seem, research has shown that we are more likely to commit the Fundamental Attribution Error when we’re in a good mood, compared to when we’re in a bad mood.

How is this? Apparently, being in a bad mood can make us more vigilant and systematic in our processing, which in turn causes us to pay closer attention and retain more information.

[3] We ignore the situation deliberately

Studies have shown that people tend to think of immoral behavior as highly diagnostic of immoral personality traits.

In other words, people think that somebody must be an immoral person in order for them to do something immoral.

# Put yourself in the other person’s shoes

Exercise empathy. It’s easy to blame other people’s conduct on some permanent feature of their personality, especially when we view that feature negatively—but it’s hard to keep feeling that way once you imagine how you’d feel in their position.

Emotional intelligence includes empathy, as well as self-awareness, self-regulation, and other traits. It is defined by Daniel Goleman as:

"The capacity for recognizing our own feelings and those of others, for motivating ourselves, and for managing emotions well in ourselves and in our relationships."

Excellent and comprehensive article from Shane Parrish of Farnam St: The Fundamental Attribution Error: Why Predicting Behavior is so Hard