Plotting Your Position In Life, The Universe, and Everything 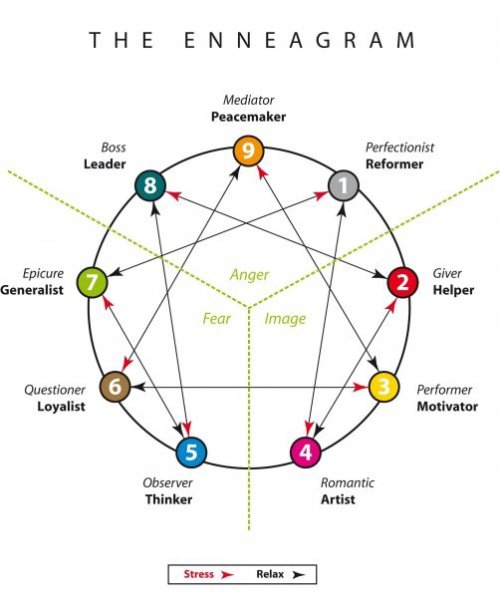 Introduction To The Enneagram Of Personality Types

The Enneagram of Personality Types was originally devised by Oscar Ichazo.

The symbol has roots in antiquity and can be traced back at least as far as the works of Pythagoras. The symbol was reintroduced to the modern world by George Gurdjieff.

Ichazo drew on his knowledge of variety of spiritual and esoteric traditions, but the actual combination of those traditions connected with the symbol is purely his creation.

"The 'Traditional Enneagram' only goes back to the 1960's when Ichazo was first teaching it, although the philosophy behind the Enneagram contains components from mystical Judaism, Christianity, Islam, Taoism, Buddhism, and ancient Greek philosophy (particularly Socrates, Plato, and the Neo-Platonists)—all traditions that stretch back into antiquity."  [Enneagram Institute]

It is in many ways a modern synthesis of various wisdom traditions sometimes referred to as Integral Theory and associated with Ken Wilber et al which attempts to synthesise a multi-disciplinary approach to the evolution of life and consciousness into one holistic framework.

Ichazo saw the Enneagram as a tool for looking at specifics of the structure of the human soul and how it becomes distorted by the developing ego.

"We have to distinguish between a man as he is in essence, and as he is in ego or personality. In essence, every person is perfect, fearless, and in a loving unity with the entire cosmos; there is no conflict within the person between head, heart, and stomach or between the person and others. Then something happens: the ego begins to develop, karma accumulates, there is a transition from objectivity to subjectivity; man falls from essence into personality." [Oscar Ichazo]

As you can see from the graphic of the enneagram above, it is represented by a circle with nine equidistant points marked on its circumference, and each point is designated by a number from one to nine, and by convention with nine at the top. Each point represents one of nine basic personality types.

In overview, the Enneagram can be seen as a set of nine distinct personality types, with each number on the Enneagram denoting one type.

It is common to find a little of yourself in all nine of the types, although one of them should stand out as being closest to yourself.

According to the Enneagram system:

For an introduction to 9 personality types and the connections between them, please refer to:

How The Enneagram Works

Descriptions Of The 9 Types