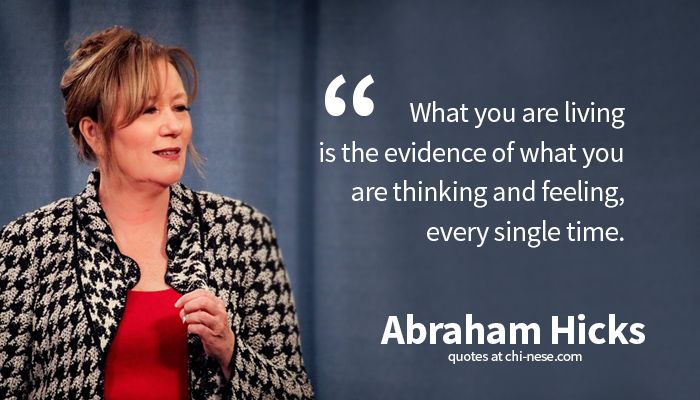 Who or what is Abraham Hicks?

Firstly the Hicks element is Esther Hicks, who frequently identifies as "Abraham Hicks", and is an American business woman who together with her late husband  Jerry Hicks - a former top level Amway salesman - has co-written nine books and presented numerous workshops on the law of attraction.

Prior to a falling out with Rhonda Byrne [the business woman behind "The Secret"] over money, Hicks appeared in the original version of the 2006 film "The Secret".

Hicks' unique selling proposition [USP] is her connection and self identification with "...a group of non-physical entities called Abraham."

Hicks describes what she is doing as tapping into "infinite intelligence" which she channels live on stage.

When Hicks is on stage channeling "Abraham" she speaks about herself in the third person.

The second entity is "Abraham". The following verbiage is taken directly from the Hicks' website and is how Hicks - speaking as Abraham - answers the question about the identity of "Abraham":

"Abraham is a name. A symbol. A feeling. Evocative-yet simple-like we want our names to be.

Abraham has described themselves as “a group consciousness from the non-physical dimension” (which helps a lot!). They have also said, “We are that which you are. You are the leading edge of that which we are. We are that which is at the heart of all religions.”

Esther herself calls Abraham “infinite intelligence,” and to Jerry they are “the purest form of love I’ve ever experienced.”

We say check out Abraham for yourself. It’s the only way to go and the only way to know. If watching or listening or reading the words of Abraham feels good to you, then you’re in the right place. If they sound “off” to you, or maybe even a little bit annoying—adventure on!

“I don’t know what they are and I don’t care what they are. I’m just using them for the good it will do for myself and others.”

And sometimes—all is said with just one word.

Abraham. They just are what they are." "


What Are Abraham Hicks Core Teachings?

A synopsis of Abraham-Hicks’ teachings as stated on the Hicks' website:

# You are a physical extension of that which is non-physical.

# You are here in this body because you chose to be here.

# You are a creator; you create with your every thought.

# Anything that you can imagine is yours to be or do or have.

# As you are choosing your thoughts, your emotions are guiding you.

# The universe adores you for it knows your broadest intentions.

# Relax into your natural well-being. All is well. (really it is!)

# You are a creator of thoughtways on your unique path of joy.

# Actions to be taken and possessions to be exchanged are by-products of your focus on joy.

# You may appropriately depart your body without illness or pain.

# You can not die; you are everlasting life


Why Am I Featuring Abraham Hicks On This Site?

My intention with this site is to write articles and create resources that are in line with the primary focus of this site which is to teach you how to think effectively.

I do not normally include material that I do not find helpful and to which I feel considerable distaste and antipathy. But I am including this material on Abraham Hicks as it relates to the law of attraction which I have written about in depth.

I am featuring this page on Abraham Hicks as a protest and a warning.

So what are my objections?

[1] Abraham Hicks is a business

The primary motivation behind this and Rhonda Byrne's great commercial success "The Secret" is money.

These people are business people in the entertainment industry posing as inspirational and spiritual people. The Secret and the "Abraham" project are brands.

When the whole LOA idea took off after repeated exposure on Oprah, it was most noticeable how so many well established and respected people in the personal development space jumped on the bandwagon. People like Jack Canfield, the late Bill Harris and the late Dr Wayne Dyer, and many others.

These people knew better - or should have - so it shows where their true priorities lay when they got themselves embedded in this spurious and damaging non-sense!

Have no illusions about it, LOA and all its spin-offs is a financial juggernaut. Seems like no-one wanted to miss out and they all wanted their piece of the LOA pie.

If the Hicks' [and Rhonda Byrne] stuck to their "dog and pony" shows as entertainers there would be no issue, but they don't.

Esther Hicks offers pseudo-science based, ridiculous, and unproven preposterous claims such as the one in the picture at the head of this article.

So we have this disembodied entity - or group of entities - claiming to be Abraham, channeling its gems of wisdom, pearls of comfort and reassurance through Esther Hicks.

So here's the question:

How do we know whether Abraham is benign or malign?

Is Abraham is an "angel of light" bringing genuine spiritual truth which aligns with teachings at the core of major faith traditions?

Or is Abraham an "angel of darkness", masquerading as an angel of light, bringing subtle lies, distortion and deceit to ensure the vulnerable and unwary?

Is Esther Hicks a genuinely wise, insightful and deeply spiritual person shining the light of spiritual truth into the darkness of ignorance - or is she a charlatan?

Evaluating the law of attraction

Follow these links for a comprehensive assessment of the key aspects of the law of attraction:

And then cut to the summary recap on key points of our evaluation of the law of attraction:

She makes unsubstantiated and preposterous claims that are dangerous to the unwary and the vulnerable upon whom she and all of her fellow predators prey in their feeding frenzy of financial greed.

“That which Jesus was, Esther is”  [Abraham]

[3] Abraham Hicks - "By Their Fruit You Shall Know Them"

In the Christian bible, in the book of Mathew, chapter 7, verse 6, the writer says:

So what are the fruits of Abraham Hicks' teachings?

Since all that happens to us is supposedly the result of our positive or negative thoughts, the millions who died either through political persecution, genocide or starvation have therefore brought this upon themselves by their thoughts, and they are therefore responsible for their own destruction.

This is repugnant rubbish!

We can do anything and be anything we want, because deep inside there is an awesome power of unlimited potential a deep spiritual self that once unleashed, will empower us to become the tycoons, the rock stars, the writers that we really are.

The true spiritual self is an infallible guide to the good life and unlimited personal fulfillment.

If this is not happening, if we are confused, this is clearly because we are not connected to its power...or say they say!

So if it doesn't work - it's your fault!

Exploitation of the vulnerable

Those who suffer from real problems need real help. The price for a little "feeling-good" is much higher than the charlatans promoting these teachings will ever acknowledge. Serious illness has to be taken very seriously, and treated according to the best knowledge we have.

Positive thinking does not cure cancer - Jerry Hicks' death from cancer is proof of that claim.

Shattered hope is doubly hard to bear when false expectations have been raised  - the resulting despair is very hard to bear.

The review posted below is a full dissection of the Abraham-Hicks ideology and its consequences, written by someone who followed it for 5 years.

This guy is objective and offers what reads as a balanced and even handed analysis based on his considerable experience.

The comments are interesting and useful, and his blog also contains several articles on people's experiences with the Abraham Hicks teachings.

Please read the full article at the link provided below.

A mix of harmful and helpful info from a questionable source

# A word to the wise - if something seems too good to be true: IT IS.

# I was committed to these teachings for 5 years. They encouraged an emotional high that made me feel my life was amazing. I felt I knew the secrets of the universe.

# Like a drug, one of the reasons for the rave reviews is that it promotes highs and feelings of enlightenment.

# What IS the source? Don't romanticize so-called channeled information as automatically better, more pure, more truthful, or without an agenda.

# My life seemed unique through my special Law of Attraction filter, but it was no different from regular life

# That's what Abraham-Hicks taught me to do is see normal life through a special lens of magic.

But do not surrender your mind to one simplified ideology.

Please read the full article and make up your own mind!