As A Man Thinketh 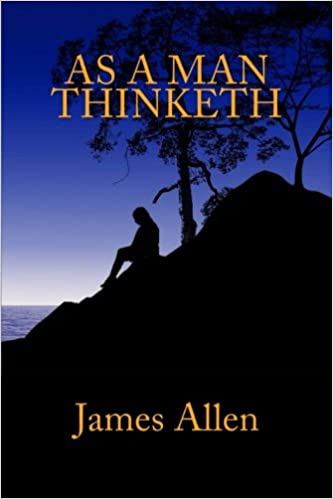 As A Man Thinketh - Introduction

“As A Man Thinketh” was written by James Allen a British writer and published in 1903. Allen was known for his inspirational work and is regarded as one of the pioneers of the personal development and self-help movement.

Allen described his pamphlet or essay as follows:

" It shows how, in his own thought-world, each man holds the key to every condition, good or bad, that enters into his life, and that, by working patiently and intelligently upon his thoughts, he may remake his life, and transform his circumstances."

“As A Man Thinketh” has been in circulation since it original publication and has been a source of inspiration to many.

The phrase "as a man thinketh" is derived from the Christian bible book of Proverbs chapter 23 verse 7.

As A Man Thinketh - Underlying Philosophy

The philosophical basis of the essay is monistic, in practical terms this means that everything is of one and thoughts and matter are inseparable.

"Mind is the Master power that moulds and makes,
And Man is Mind, and evermore he takes
The tool of Thought, and, shaping what he wills,
Brings forth a thousand joys, a thousand ills: —
He thinks in secret, and it comes to pass:
Environment is but his looking-glass."

Inherent in this philosophical position is what is referred to as the responsibility assumption which is a doctrine - or belief - prevalent in the world of personal development that each individual has substantial or total responsibility for the events and circumstances that occur in their life.

This belief states that there is a far stronger connection between a person's thoughts and the circumstances of their life than is commonly assumed.

This belief has a specialized meaning beyond the usual idea of taking responsibility for something. There are broadly two degrees of responsibility attributed to a person: either:

A connection between thoughts and actions describes a correlation but not a causation.

“As A Man Thinketh” clearly supports that view.

Personally I am very comfortable with this outlook because personal and observed experience has shown this to be true time and again.

This is controversial and is taught in "The Secret" and by "Abraham Hicks" and many others. This is what's known as "reverse mental causation", that is to say that your thoughts are responsible for everything  - every circumstance  - in your life.

This belief describes causation between thought and circumstance.

Clearly this is absurd and deeply offensive, but nevertheless these people teach this!

I have addressed this point specifically here and at length with examples and a rebuttal, and evaluated the whole of the law of attraction here in considerable depth.

I repeat here my conclusions:


As I have said, the belief of "total responsibility" with a 100% causation of events and circumstance and a person's thoughts is in my view preposterous, deluded [as totally belief based and not proven nor supported by any evidence] and to be rejected because of the damage this belief can do.

James Allen is not explicit on this point, but he does appear to veer in this direction...

“As A Man Thinketh” is a thoughtful reflection and extended meditation on the power of thought but not, in my view, to be taken too literally.


"As A Man Thinketh" - Quotations