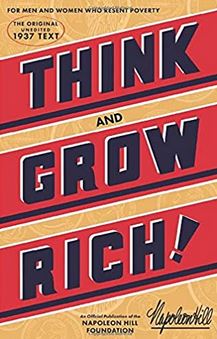 "Think and Grow Rich" was written by Napoleon Hill and published in 1937.

It follows on from [although not connected with] Wallace Wattles "The Science Of Getting Rich".

The book was promoted as a personal development and self-improvement book, so although the book may appear to be all about making money Hill claimed that his philosophy can be adapted to help people do anything or become anything they wanted.

Published during the the Great Depression in the US it is not surprising that the book has sold so well at currently over 15million copies.

Napolean Hill  claimed to be inspired by a suggestion from business magnate and later-philanthropist Andrew Carnegie and that he spent 25 years interviewing many millionaires to uncover their success secrets. Then post publication of Think And Grow Rich and the success that followed he claims to have been an advisor to Presidents...

However the reality is very different.

Prior to the publication of "Think And Grow Rich" Napolean Hill was involved in a succession of shady and criminal activities.

He was not encouraged to write the book by Andrew Carnegie who he never met, and most if not all the interviews with successful business men did not take place.

He was not an advisor to any President.

The Modern Self Help Industry Is Based On Foundations Of Fraud, Spurious Claims and People Selling Shovels

In summary, Napolean Hill was a fraud, and his only success was this book which was a work of fiction that makes massive unsubstantiated claims.

His personal life was a total mess with 5 broken marriages and shattered relationships with his ex wives and children.

This book is not based on any of his own experiences of success, in fact this book was his only commercial success.

And yet... this man... this self promoting liar and fraud is the founding father of the modern self-help industry.

Napolean Hill's fiction forms the basis of the work of many if not most of the "big names" in the personal development industry - a legacy built on lies and deceit.

How many of the well known self help gurus that we all know of have actually ever made any commercial success aside from selling their own self material?

Their fortunes are based on "selling shovels to gold prospectors".

The 14 "Principles" listed in the book are:

In Think And Grow Rich Napolean Hill claims that there is an unspoken secret which all successful business people know... and it is this:

"Embody that which you want to become"

# The only thing all the successful people have in common

# They neglect their former self

# They act like it before they got the result

# They know what they want and look like it

# They act without doubt

# They give an impression of certainty

# They take every advantage

In other words:  Fake It Until You Make It!

Regardless of what we may think about Napolean Hill as a person and the background of his personal life and business life, a number of things are very clear: