Establishing The Issue That Lies Beneath A Presenting Problem 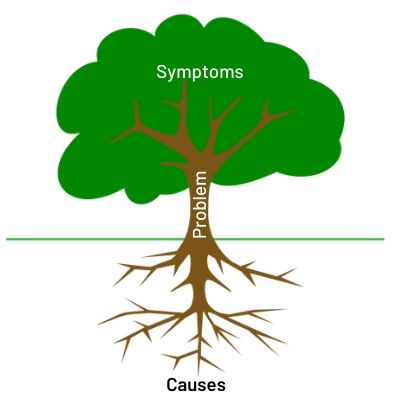 The mental model of root cause analysis involves establishing the issue that lies beneath a presenting problem.

Often the true underlying root issue is not immediately apparent and is only uncovered with persistent investigation.

Root cause analysis can be applied in many different contexts.These tend to fall into 2 categories:

The traditional application of this technique is situational and frequently in organisations and businesses where there has been a systemic, process or performance failure.

With this type of analysis the objective is to uncover the ultimate root cause and to identify the appropriate remedial action to prevent a re-occurrence .

There are various factors which we must take into account when figuring out root causes.

The other - and frequently neglected - application is relational, that is to say uncovering the root underlying issue behind someone's behaviour and thus being able to understand them better and to provide the most resourceful response.

For example, I might say: "My partner has left me." The given reason will be something along the lines of: "She says she doesn't love me anymore".

But a deeper enquiry will reveal that in fact she has feels that I am controlling and do not allow her enough space.

A few weeks later, when she has an emotional and psychological breakdown and seeks professional help, it becomes apparent that she has deep-seated issues going back to her childhood when she was physically abused my her uncle who used to beat her with a belt.

The "solution" in this situation could be for me to let her know that I still love her and I am "holding a space" for her while she heals. This basically means that rather than angrily trying to deal with the many presenting issues that accompany a relationship breakdown I let her know that I am giving her as much space as she needs while she heals and that I hold no expectations.

This will require a high level of emotional maturity on my part but ultimately will allow for us both to heal and move on, either together in a renewed relationship or separately.

This is where we apply some of our thinking skills and employ mental models.

First Principles Thinking whereby you reduce the situation down to the most basic parts that you know are true. This involves removing all assumptions and digging deeper and deeper than most people will until you are left with only the foundation truth of a situation.


Another mental model that can be applied is Second Order Thinking which is about going beyond the obvious and avoiding unintended consequences. This involves questioning everything, not making assumptions, and when exploring possible solutions, always asking "What happens then?" and "Why?".

A variation of this is the "5 Whys" technique, which necessitates asking ‘Why?’ five times to a given statement. The purpose is to understand cause and effect relationships, leading to the root causes. Five is generally the necessary number of repetitions required. Each question is based on the previous answer, not the initial statement.

Using the example of a laid off employee  we can see how this technique works - Shane Parrish  again:

Other mental models that can be usefully employed in root cause analysis are:

Return from "Root Cause Analysis" to Mental Models