The power of belief and expectation of an outcome regardless of the lack of any substance to that belief or expectation. 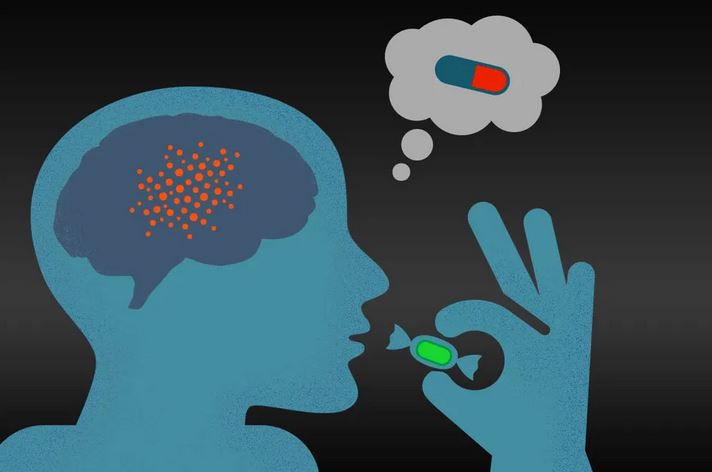 What The Placebo Effect Is And What It Isn't

Traditionally, the placebo effect occurs when false, or dummy, treatments of inert substances [that appear to be real but aren't] are administered during trials on new drugs, and patients still see their symptoms improve.

As a broad generalisation the placebo effect takes place with approximately 30% of the sample to who it was administered. This means that about 1 in 3 people report that they are feeling better after they have received a placebo. However this has increased to 60% in certain recent drugs trials.

The word placebo is Latin for "I will please" and this provides the key to understanding what it is and what it isn't.

The power and the benefit of the placebo lies in how it makes people feel.

Placebo is about feeling it is not about healing.

If it meant healing the word would be Sanabo  for "I will heal". Steven Ross Pomeroy, editor of "RealClearScience" says quite emphatically that:

'The placebo effect is mistakenly viewed as the "power of positive thinking" creating a physiological healing process triggered by belief or expectation, when in reality it is an improvement in perceived symptoms.'

You can not cure cancer or heal a broken leg with a placebo, but it might ease the pain and suffering associated with these conditions.

What Creates The Placebo Effect?

The placebo effect is at the interface of biology and psychology.

“The placebo effect is the most interesting phenomenon in all of science, it’s at the precise interface of biology and psychology...

Placebos seem to have the greatest power over symptoms that lie at the blurred boundary between the body and the mind.

The placebo effect is about all the other surrounding stuff that accompanies the placebo.

“...finding out what is it that’s usually not paid attention to in medicine — the intangible that we often forget when we rely on good drugs and procedures. The placebo effect is a surrogate marker for everything that surrounds a pill. And that includes rituals, symbols, doctor-patient encounters.”

Some of these factors include:

The Wider Impacts Of The Placebo Effect

Traditionally we usually think of the placebo effect in the context of various medical interventions and treatments, and we associate the benefits with pain relief and feeling better.

However, there is growing evidence that the effect can also work in other ways:

Dr Christian Jarrett has written an informative article with references and resources that explore the wider impacts of the placebo effect:

[1] The Power of Expectation

The placebo effect is based on the power of belief and expectation of an outcome regardless of the lack of any substance to that belief or expectation.

This is not magical thinking, but the interaction of your mind and body and the positive neurological benefits that can be generated by your belief and expectation.

How you feel has a major effect on how you think and behave.

How you think and behave has a significant effect on the quality of your response to the events in your life.

It is the cumulative effect of your response to the events in your life that shape your long term life experience.

Put simply, the stronger your response to events - the better the outcome.

[2] The Power of Empathy And Compassion

We are all susceptible to people who are persons of direct influence in our lives.

Considerable research into the placebo effect has shown how the power of empathy and compassion from a person of direct influence in someone's life can reinforce and support a positive belief and expectation.

Compassion is an important aspect of living a balanced life, not only is it good for the other person, it is good for you - it is in your self interest.